As the second largest provider of potable water in the state of Georgia, the Cobb County-Marietta Water Authority (CCMWA) prides itself on using the latest technology and innovation in water treatment to ensure optimal efficiency and safety in its operations.

CCMWA relies on two water treatment facilities: the James E. Quarles Treatment Plant in Marietta, which treats water from the Chattahoochee River, and the Hugh A. Wyckoff Treatment Plant in Acworth which treats water from Allatoona Lake. Together, the treatment plants prepare water for wholesale distribution to 11 retail water suppliers, as well as industry and institutional customers.

The Wyckoff Water Treatment Plant, built in 1965, has grown to keep pace with regional water needs in northwest Georgia and evolved to address public health and safety issues. While chlorine gas had traditionally been used as an effective method for water disinfection, its hazardous potential became a real concern for water treatments facilities across the country. CCMWA was quick to address this through a major investment that included the installation of an onsite sodium hypochlorite generation system in 2012.

Following a review of available systems on the market, CCMWA selected the ClorTec® 2x CT1500 PPD OSHG system from De Nora Water Technologies. This ClorTec® set-up had proven its ability in numerous installations to drive benefits including the elimination of bulk chemical storage, fewer disinfection byproducts, and a notable reduced threat to the safety of employees and the public at large. Delivered in August of 2012, the ClorTec system, consisting of the1,500 pounds per day on-site sodium hypochlorite generator and associated equipment, was an ideal fit for the plants, with the flexibility to meet the space restrictions and allow for expansion.

Several years later, after experiencing consistent operational improvements thanks to the new system, CCMWA determined the need to expand the system by adding a third onsite generator.

“We were very pleased with the two existing generators and their productivity and were concerned that if one of them were to stop functioning properly, as can happen in the lifecycle of this type of equipment, it would be difficult for us to maintain our preferred operational level and quality,” said Terry Wilson, Division Manager of the Wyckoff plant.

As the technology has continued to develop in recent years, Wilson and his team were also drawn to the new brine pump added to the ClorTec® DN generator, which helps improve water pressure levels. The latest generation of De Nora’s on-site sodium hypochlorite generation system incorporates best-in-class brine electrochlorination technology, allowing operators to more accurately control and adjust the amount of brine to the system. Replacing less efficient mechanical sensors, the new version also includes analog flow sensors for water and brine, as well as a water temperature readings transmitted to the programmable logic controllers. It also offers the highest efficiency in the industry and the guaranteed lowest consumption of salt and electricity, with an upgraded instrumentation panel for greater operator control.

Installed in Spring of 2017, the additional new 1,500 pounds per day ClorTec® DN generator is now part of a cycle through which the three generators alternate in use, two at a time.

“The addition of the latest generator has upgraded our entire system, with clear enhancements made by De Nora to improve operations,” said Craig Scheibel, Process Control Programmer with CCMWA. “The new instrumentation panel and specifically the analog signals enable us to have not only greater flow control, but also better diagnostic capabilities should a fault occur.”

As CCMWA proactively maintains its commitment to providing sustainable, reliable drinking water while also ensuring public health and safety in the region, it has found a practical solution through on-site onsite sodium hypochlorite generation.

“Even in the high-demand season of summer, we’re pleased to report seven to nine hour run times and excellent production of potable water for our satisfied customers,” said Wilson. 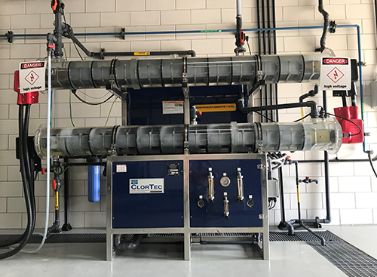